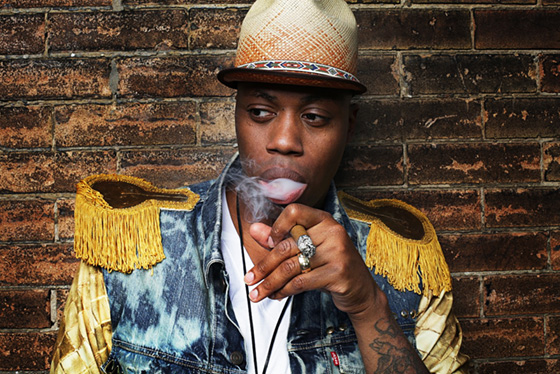 Kardinal Offishall's moniker of "Mr. International" is as appropriate as it is catchy. His unique twist of hip-hop is loved internationally due to his high-energy stage performances and charismatic persona, making him both incredibly original and world-renown.

The Toronto bred star has criss-crossed the globe performing in some of the most prestigious stadiums, arenas, and festivals, giving his fans the ultimate high energy, mash-up performance.

Kardi first created his worldwide buzz through incredible rhymes carefully laced with patois, which was fresh to the world's music scene. Releasing classic singles such as "Bakardi Slang", "Ol Time Killin" and "Maxine", rap and dancehall fans caught on immediately.

In 2008, Kardi joined forces with Akon and his Kon Live Music/Interscope imprint. This musical marriage gave birth to millions of songs sold and chart topping singles around the world including "Numba One", “Just Dance rmx” with Lady Gaga, “Beautiful” and of course the smash hit "Dangerous" with Akon.

Kardinal Offishall has been nominated for 15 Juno Awards, and is a multiple ASCAP Award and Socan Award winner. He also holds four MMVA’s under his belt, along with epic MMVA performances. Kardinal is one of the hardest working men in the business and never stops working to perfect his craft as an artist, performer, entertainer, and businessman.

Kardinall Offishall is gearing up to release his new EP series named “Kardi Gras”. The album will include collaborations with Stephen Marley, JRDN, and recent RCA/SONY signing Bunji Garlin, to name a few, and boasts production from Grammy Award winning producers Supa Dups, T-Minus, and Haze. Most importantly, this album will feature Kardi's growth as an entertainer and showcase the 3 sides that make up who he is: Mainstream/Underground/Dancehall Influenced.

Throughout Kardinal's amazing adventure, his resume includes elite performances such as the Prince?s Trust Fashion/Rock show that was broadcast to over 400 million viewers in over 70 countries worldwide, performing in Malaga, Spain to over 250,000. Kardinal Offishall has positioned himself as an iconic figure amongst the best in the industry.

"Kardi's like a rollercoaster ride. He's the epitome of what it sounds and looks like when North American and West Indian culture come together. He's a true entertainer. Any artist I can watch on mute and wanna know what he's saying is someone I wanna work with. That's why I had to work with Kardi."