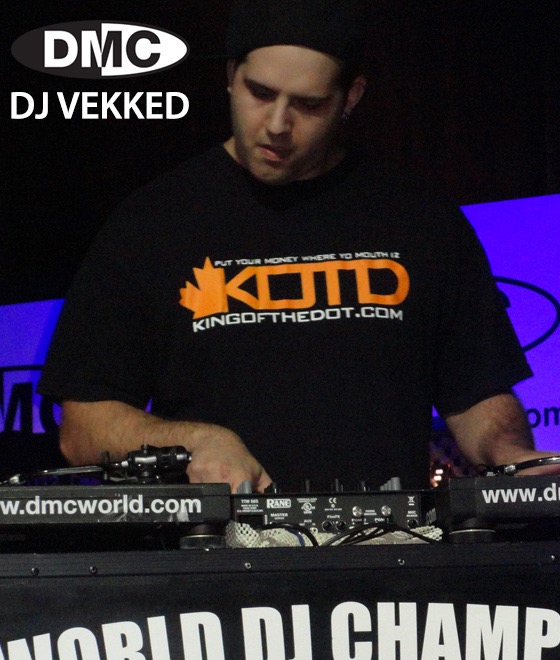 Jake "Vekked" Meyer grew up in Paisley, Ontario, a small village in southwestern Ontario. It's a rural place where country music and soft rock dominate radio stations and hip-hop is not rarely heard on the airwaves.

Jake began making music at the age of 12. Initially, this took the form of recording himself beat boxing into a computer microphone and at the same time, with very limited software and knowledge, attempting to create some form of music. For the first 2 years that he made music he produced house, trance and techno with a steady kick drum. Once he reached high school, Jake immersed himself into the b-boying and break dancing scene. It was here that he combined his interest in hip-hop with music production and began creating hip-hop beats.

At age 16, Jake made a decision to focus on becoming a DJ and specifically, learn how to scratch. His inspiration stemmed from watching videos of turntablists such as, Invisibl Skratch Piklz, DJ Qbert and Mix Master Mike.

The name DJ Vekked came from Jake's first flying experience as a child. The pilot explained to his inquisitive mind that planes travelled on highways in the sky called air vectors. The idea that airplanes were so free but still had direction intrigued him. Later he discovered that there were other DJ's with the name DJ Vector so he shortened it to Vect and then Vekked to play on the word Vexed.

Vekked was first exposed to battling in 2005 when he attended the DMC regional in his hometown and the next he competed in this same battle. Like many other successful DJ's who came before him, his first battle experience was not a smooth one. However, this only motivated him more to practice so he could enter more battles.

A year later, Vekked entered his second battle in Toronto. Even though he did not place, he received great advice from the 2003 Canadian Supremacy champ, DJ M-Rock, who told him that he saw a lot of potential in him but he should take a different approach. He presented him with a thought that has been a guiding force for developing his routines; "do not battle for the sake of battling but battle to bring something new to the art form".

Vekked went on hiatus from battling to practice techniques that were unique to him and he focus on bringing original ideas to fruition. It wasn't until 2011 that Vekked returned to the battle scene and entered the Hamilton DMC regional. During his first battle back he conquered his nerves and won! After 7 years of DJ'ing he had claimed his first title.

Just weeks later Vekked took home another title: the DMC nationals. This was a turning point in his DJ’ing career; in only 3 months he went from never winning a battle to being a regional and national champion. Automatically, Vekked was entered into the DMC Worlds, but he felt his routine was underdeveloped and because he never had the time to build a routine that represented his skill set, he made a controversial decision to not compete in the World finals for Canada.

As soon as Vekked finished battling in 2011 he began practicing for DMC 2012. Unfortunately, he wasn't be able to defend his title because he had to start from the regionals. But that ended up only being a minor setback as he won the Canadian finals again and this time he was going to the World finals confident and happy.

Vekked travelled to England a month later to compete in the DMC Worlds. After facing three of the strongest DJ's in the battle, Vekked moved on to the final round against a DJ from the United Kingdom and came out victorious. The win was particularly sweet because the judging panel contained the likes of DJ Q-Bert and DJ Craze.

Vekked's next big battle was IDA. It was the first year that IDA came to Canada and he took the win fairly easily. The World finals were held in Poland and here Vekked had the opportunity to become the first North American to win the IDA World title, as well as the first DJ to win both a DMC and IDA world title in the same year. The IDA finals shaped up to be just as tough as DMC, if not tougher because there were multiple countries with strong DJ's that didn’t participate in DMC that were now in IDA. This battle also required the most amount of material, and the least amount of DJ's made it past the eliminations.

Vekked once again ended up in the final round, this time against France. He completely nailed his routine and won the IDA World finals!

Vekked's ability to develop routines that represent his skill set is what has allowed him to dominate the DJ battle scene over the past few years not only within Canada but also on an International level. The future is bright for Vekked as he will continue to build on his success by defending his titles and also work on improving the turntablist artform in Canada. Vekked has started a website, rather a platform for DJ's, www.tablist.ca, which provides DJ's with advice and a forum to discuss the scene in Canada.