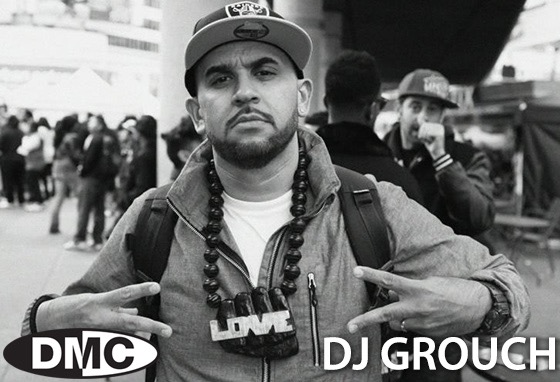 Born 1973 in Panama, Central America and arriving in Toronto 3 yrs.later, DJ Grouch has always been around music. His love for Hip Hop started at the early age of 10, b-boying outside with his neighborhood friends. Realizing he wasn't going to be the next member of the Rock Steady crew, he began to focus more on the art of deejaying. Inspired by the LL Cool J video "I'm Bad", Grouch would imitate what Bobcat and Cut Creator did in the song. "I just saw those two deejays going at it on the turntables and I knew that's what I wanted to do."

Drawing influences from the likes of Jazzy Jeff, Cash Money, DJ Scratch, DJ Aladdin and Richie Rich, Grouch would practice every chance he could on his Pop's record player. "I loved hearing scratching in songs. That was my favorite part of the record, like just hearing Primo, Pete Rock or whoever scratching on the track. I would sit there and imitate what those cats were doing for hours!" He eventually got his first Technics 1200 in 1990. From there he started doing house parties which eventually led him to a gig on CHRY 105.5 FM doing fill-in shows. In 1993, Grouch landed his own time slot (Strait Frum Da Undaground with host K-9) and volunteered at the station for over 15 years. The show changed into the GQ Wake Up Show (with hosts Que and Contagious) in 1995 and into the SoundCheck Show (with host Contagious and Public and DJ Fingrprintz) in 1999-2008. Grouch was also part of the Project Bounce team from 2005-2008.

The exposure on the airwaves, lead Grouch to compete in numerous deejay competitions (The Conflict, Metro Mix-Off, Ron Nelson Hip hop Battle) around the city. "This guy named Rob heard me on the radio and told me I should enter this deejay comp called The Conflict." In his first battle he competed and won against a rival who would eventually become his partner, D-Scratch. "D and I have a long history. We were bitter rivals for mad years. He beat me so many times, but I eventually beat him in 1995." That was a very important year for the young deejay, winning both the energy 108 battle and the Zulu Nation Canadian battle in one weekend. This was also the year Turnstylez was born. Grouch and D realized they both had much in common, so along with Scratch's cousin Lil' Jaz, they formed Turnstylez and it's been on ever since. Individually and as team they have acquired numerous titles, but it is the latter that got them the notoriety. "We change the way a team should compete in a deejay battle. We had 3 guys on 6 turntables all being used at once! No one's ever done that before and made it sound funky!" In 1998, Grouch along with Turnstylez won the 1998 ITF WesternHemisphere Team Category in New York defeating The Allies (DJ Craze’screw) and the STA's (DJ Realm’s crew) among others. "Winning that comp was one of the greatest feelings. We had so many people up from Toronto repping and cheering us on!" They represented Canada in the ITF world finals that year in Amsterdam, competing against the defending champs the Beat Junkies (Babu, Melo D, Rhettmatic), placing third. "We were disappointed with the result but that’s how battles are sometimes. When the Junkies won even they had to give it up for us. Melo D gave respect to us as innovators during his acceptance speech."

DJ Grouch has definitely left his mark in Hip Hop. He has performed with various Canadian and International Hip Hop stars, traveling across North America (Canada and the U.S.A) and Europe. He has played in almost every club and venue in Toronto. His razor sharp scratches can be heard on numerous Canadian classics such as Saukrates "Father Time rmx" (1995), Elemental "Living Under Water" (1995), Grassroots f/ Arcee "Thematics" (1999) Nautilus "Twelve/Record Making Manual" (2001) and DL Incognito "Rugged Raw" (2003) and recently featured on 3 tracks off the Moss produced Special Reserve (2009) by Obie Trice among the many. In 2003 DJ Grouch, along with his partner Contagious Theory, released their own wax under the moniker Pherenziks. He has also deejayed for many home grown and international Artists including Jully Black, Melanie Durrant, Kardinal Offishall, Choclair, Thrust, Citizen Kane, Slum Village, Pharoahe Monch, Black Milk and Maestro Fresh Wes. As of late his main focus has been on his production skills, releasing various edits, remixes and original tracks of different genres.

Grouch is currently one of the head instructors at Scratch lab and also teaches at Trebas Institute and the Remix Project.